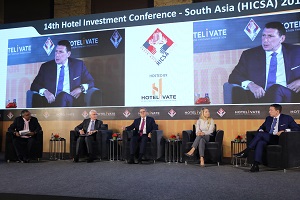 The investment forum’s new avatar created by Hotelivate this year made the goings-on more interesting and interactive for the audience, particularly some of the headlining interviews that gave a glimpse into the minds of some of the industry stalwarts.

Great expectations were in order this year after the industry’s much-awaited investment forum changed hands. Manav Thadani, Founder Chairman, Hotelivate, had promised that the 14th edition of Hotel Investment Conference-South Asia (HICSA) will be new and improved, and it lived up to its expectations. Held in Mumbai from April 4-5, 2018 at the Grand Hyatt, HICSA 2018 was more interactive, varied, and incisive. There were fewer speakers, a reduced number of panel discussions, but more up-close and personal interviews, keynote addresses, and master classes.

This year HICSA was attended by 450 people from 15 countries. Of this, 19 people were from Singapore alone, followed by the USA, UAE, and the UK. Around 25 per cent of the total delegates were owners – private and institutional owners. Interestingly, around 20 architects and designers attended this year, which is a lot higher than the event has ever seen. This, Thadani says, shows that the investment cycle is on the upswing and more feasibilities are happening.

Day one
In a first, Thadani was interviewed by friend Kapil Chopra, Chairman of the Board, EazyDiner, which set the tone for the day that was dedicated to keynote addresses and personal interviews with leaders of the industry. This was followed by a talk by Deepak Bagla, Chief Executive Officer and MD, Invest India, who spoke on the potential of India as a destination for investment.

Next up was the man of the hour – Patu Keswani, Chairman and MD, Lemon Tree Hotels, which was to make its stock market debut on April 9. Keswani talked about the art of growing companies drawing on his experience as a Taj man who then went on to start Lemon Tree Hotels. “Sweat your asset,” he advised.

Discussing the future of travel technology was Deep Kalra, Chairman and Group CEO, MakeMyTrip. After 18 years of MakeMyTrip, he said that there is a lesson in hanging in there. “We stayed fixated on growing business, but were always flexible on how to do it. Technology is ravaging the world every day and if you are not nimble, then you’re gone. Throw your dogma out,” Kalra advised.

This was followed by a tête-à-tête with Mark Hoplamazian, President and CEO, Hyatt Hotels, who has spent several holidays in India with his family. Of hoteliering, he said, “So much of this business is about emotions.”

The day ended with an interview with Arne M Sorenson, President and CEO, Marriott International, who was in India to announce the group’s 100th property. Also a lover of India, Sorenson spoke about the Starwood acquisition. “It got an enormous amount of attention across the industry and often the first conversations would start with ‘Congratulations on that deal!’ Our response was, ‘It’s not time to congratulate us. All we did was pay more than anyone else was prepared to pay for Starwood. That’s not winning. Winning is pulling those companies successfully and driving better performance,” he said. Sorenson has holidayed in India in Rajasthan with his family, and echoed his love for the country. “India is still underappreciated as a destination. The inbound volume is way too small given how compelling this place is,” he added, naming PRS Oberoi, like Bill Marriott, a “lifetime driven and passionate hotelier.”

Day two
This day was devoted to panel discussions, except for one session where Suhel Seth, Managing Partner, Counselage, shocked the crowd with his rendition of what luxury means for the new-age Indian traveller. Puneet Chhatwal, the recently-appointed Managing Director and CEO, Indian Hotels Company, spoke in an interview of his experience in the industry and coming back to India after spending 30 years in Europe. For IHCL, he sees huge growth in the Vivanta and Ginger brands in terms of scale. When asked about IHCL’s decision to consolidate all its brands into a single one and its retraction, he said, “India is a very heterogeneous market. So, it makes sense to have multiple brands. Plus, why give up brands that are doing so good?” The hotel company is currently focusing on its new Taj property in the Andamans that is about 80 per cent complete.

Speaking about the decision to tweak the format for HICSA, Thadani said, “This is something we started doing for our fifth edition of Tourism, Hotel Investment & Networking Conference (THINC) Indonesia that was held in Bali last year where we got rid of all our panel discussions on day one. Instead of this, we introduced a lot of one-on-one interviews or keynotes. We have applied that same thing to HICSA 2018. We took our speaking slots down from 92 to 66, which allows for a better quality of speakers.”

When asked if he thinks there are deals being signed on the floor over the two days of HICSA, he added, “Back in 2008, there were 18 management contracts signed during HICSA. All I can say is that today there is an IPO taking place while HICSA is going on. This is a great venue for networking. A lot of people come here and a lot of meetings get set up on the sidelines, a lot of announcements are made. So, clearly it is the week where a lot of things happen, and we are very happy to be able to play a small part of that.”

Predictions for 2018
Thadani feels that 2018 will be better than the previous year for the hospitality industry. “Just the way 2017 was better than the year before that. The markets are on an upswing. Having said that, a lot more feasibilities are happening. We are very busy and I am looking forward to a stronger three to four years. India will see more investment for sure; I’m not sure about new brands though. We have seen a lot of brands come in and disappear because India is a tough market to crack. But overall, yes, I think we will continue to see progress,” he added.

Hotelivate partners with US consultant LWHA
Thadani announced on the sidelines of HICSA 2018 that the company has recently opened an office in Singapore. He said, “This is our fourth month as Hotelivate and we have opened our first office outside of India in Singapore. Stephane Regnault, Managing Director Asset Management, Hotelivate, heads this office. We have also simultaneously announced a tie-up with an American company called LW Hospitality Advisors (LWHA), which is a consulting firm very similar to ours. It is a team of around 45 people and they have presence in New York, Atlanta, Seattle, and San Diego. So, officially we now have seven partner offices and I can start claiming that we are a global company.” 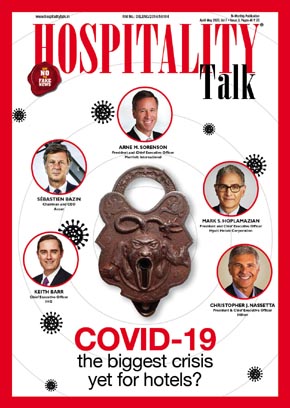 Cross Hotels & Resorts concludes its webinar with an overwhelming attendance of around 850 people....

Ministry of Tourism has decided that validity of approval or certifications of hotels and other...

ITC Hotels has partnered with Swiggy to offer diners responsible dining experiences in the comfort...

The Hotel and Restaurant Association of Western India (HRAWI) requested Maharashtra Government to devise a...